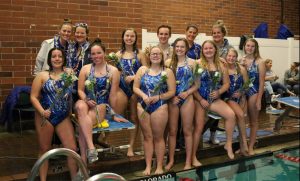 The meet also marked the end of an era, with Bingham competing in its last meet at the Marv Jenson Recreation Center, which will permanently close in March.

The Lady Miners swept the top three spots in four events and finished first in all three relays for a decisive meet victory. Huber and Wimmer claimed first and second in the 200 freestyle, with sophomore Katelyn Reidhead in third. Wimmer topped the competition in the 500 freestyle, followed by Gilchrist and freshman Natalie Hymas. Junior Aubrey Reidhead, freshman Aubrey Goates, and Hymas snagged the top three spots in the 200 individual medley. And sophomore Ashtyn Whipple won the 100 breaststroke, with junior Izzy Nielsen and freshman Skye Ogden close behind. Thompson had a strong showing in both the 100 and 50 freestyle races, finishing first and second, respectively. And Huber nabbed another first-place finish in the 100 backstroke.

Freshmen led the boys’ team with Tyler Kong finishing second in both the 200 individual medley and the 100 breast and Matt Crook coming in second in the 100 back. Junior AJ Kennedy also claimed two second places, one in the 50 free and the other in the 100 free. Sophomore JJ Thompson claimed a second in the 100 butterfly.

Bingham swimmers will have their last dual meet of the season against Copper Hills on Thursday, Jan. 23, at 3:30 p.m. at the Kearns Oquirrh Park Fitness Center.